Two years ago, at the third annual Artlinc Festival, an artist by the name of Thomas was mentioned by, Keith Tolan. Mr. Tolan mentioned the possibility of Thomas being apart of the festival. When I looked at Mr. Tolan he gave me that ‘look’ with three nods and said “he’s good”. A comment like that being made by a great artist is enough said. Thomas has turned the surface of the Lincoln Street Tunnel walkway into an additional tone for his beautiful wonders of art.
Thomas Washington 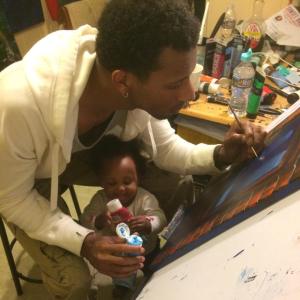 First where are you from?

What started you down your artistic journey?
I was four; my father was sketching absently while on a phone call. Watching that image appear under his pen was fascinating–I knew I had to emulate that…and, if possible, PERFECT it. I’ve devoted my life to the task; it is an ongoing effort, and will always be so. 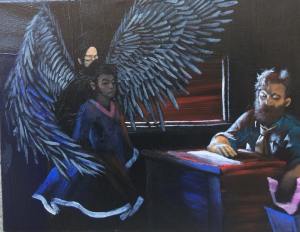 I must defer to the opinions of others (on the question of my style)–peers, critics, etcetera. Some things are best determined from the exterior; from the inside, I can only say “compulsive”. Knowing, of course, that the answer isn’t enough…
lol I feel you..
…Where do you get your inspiration from and what thought goes into your approach when concepting your art?
I am inspired by everything I observe. -Thus, the theme(s) which may inform a piece could be anything: quarks, quips, riddles, quintessential and quotidian qualities…veiling these; revealing them.

Along with being a visual artist you are an author, activist, abolitionist and more. How does that apply to your creative expression?
I suspect this so-called “creativity” is a) a trait we all have in common, and b) infinitely applicable. There is no effort I could engage in, therefore, that would NOT entail “creativity”. -The same is true for any one pursuit–a book will have strains of song, a song will be informed by prose and poetry, a fiery speech may trigger any of these…or be triggered BY any. It’s all one. Quite literally.

On topic of being an abolitionist have things changed, are they the same or are there cycles that evolve with the same set of yins and yangs?
After humans experienced Urbanization, I suspect our ways of experiencing humongous inputs (especially sociopolitical ones) underwent a shift of similar size. -So a flood might’ve made a clan pick up and move…but wherever they settled, they more or less thought and functioned the same way(s). Once we got into these cityscapes, though…well, even the flood takes on different meaning. It’s not JUST what it may bury or inundate, right? It’s also about what it REVEALS, now. About ourselves–about our alliances; about what (and who) we perceive as “alien”, “other”, and so-forth. And it HAS become a sort of cycle–you can see this echoed across our written record–how we clap back against the tides of Change. How factions attempt to maintain themselves; how they war with one another, imagining everyone cannot be “okay” simultaneously. Someone has to be “on top”, right? -Because that philosophy is at the heart of our “organization” habits: some person or cabal, telling everyone else how to go about living; telling everyone else who “deserves” what…so our leaders are both necessary AND the root of conflict. Factions in cities. Short-sighted efforts. This will result, time and again, in the _____ class rising against the _____ class, clamouring in the throes of revolution, renaissance, and so-forth.

Your work has stood out at Artlinc with the way you create your art while there. What is your approach when it comes to applying chalk to asphalt?
At ArtLinc, I come with no plan. -I walk the unclaimed spaces, studying the mars and mottles and cracks and stains of each. On one of my passes–and I always make several–a particular combination of characteristics (or an odd one) will whisper to me… 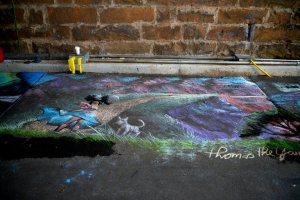 Do you have any up and coming shows or events and where can people see your work?
At 701 Whaley, I’ll be having a show opening on October 21st. I’m trying to figure out how to weaponize that one–I would like for it to benefit and/or highlight an indigenous culture, but my thoughts on executing that are still coalescing. -On September 26th, I’m participating in a panel discussion at the Camden Fine Arts Center (6 pm): “What Is Art?” -Additionally, I’ll be painting a piece for Columbia Opportunity Resources–their annual “Time For Art” Gala (November 23rd at the Columbia Museum of Art). On October 5th, I’ll be set up for “Art Along the Trail”…and, of course: the ArtLinc Chalk Art Festival.